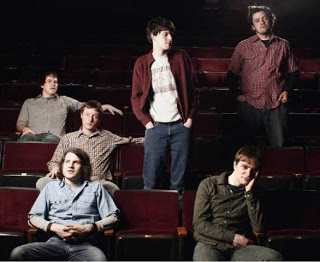 We recorded the drums with Eric Penna at his home studio in Allston, MA. I laid the rest on top of those tracks on my BR8 Digital 8-Track Recorder which recorded onto, get this, zip discs. We sent it out to dozens of labels and heard back from three: Spin Art, Fat Possum, and Misra Records. I was excited about all three of those prospects; frankly, I couldn't believe we heard back from anyone. But it was late 2006, in the thick of the era when nascent music blogs seemed to hold as much weight as Rolling Stone Magazine, and we were getting a small amount of what they call buzz. The Boston Phoenix and the Dig were writing about us almost every week, and I can't overstate how much that helped us get going. I remember seeing one article in the Phoenix about Boston bicycle safety and noting that the illustrator had drawn the bicyclist as wearing a Hallelujah The Hills t-shirt. We hadn't even made t-shirts yet.

Cory Brown at Misra was particularly excited about releasing the album. He asked what we needed to become “a real, functioning band.” I told him a van. He told me that the album advance would likely make it so we could buy a van. We signed with Misra. We took the recording contract to an entertainment lawyer who explained what all the legalese meant and suggested changes. He kept referring to possible slight changes, noting we could frame the alteration to the label as “giving us a little taste” of this or that revenue. To be honest, even if the contract contained a clause that indicated we'd never be paid more than the advance, I would've taken it. Our album was going to be released on a real label that had put out bands I loved. This was a dream come true.

The original title for the record was Let's All Plug In To The Telepathic Disco but we opted for Collective Psychosis Begone instead. I was worried that the Psychosis title would be interpreted as too political; when I expressed that fear to others, they were like, “Uhhhh, what's political about that?” Inside the Bush Jr. regime with the Iraq War being protested safely within something terrifying called “Free Speech Zones”, I felt like a kind of communicable madness had infected the entire country. I had imagined a late night infomercial offering some kind of spray you could dose a whole population with that would snap them out of a off-kilter mindset. The tagline for this product could be “Collective Psychosis Begone!”

It was Eric Meyer on drums, Joseph Marrett on bass, Brian Rutledge on trumpet, David Bentley on cello and guitar, and Matt Brown on Moog, samples, melodica, and guitar. I strummed and sang. That's a fairly complicated set up to bring into a dive bar, and I remember priding ourselves on being able to set up and break it down quickly. After telling one aging sound-man what instruments we had and the mix we needed, he dryly told us, “great, I'll just go out back now and shoot up”, as if the technical demands of our rock band had caused him to relapse into a heroin habit. 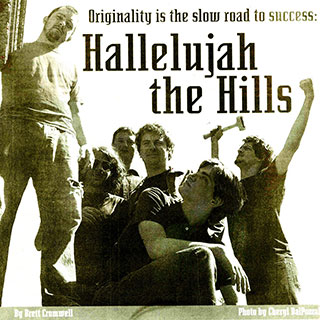 The album received some exciting, positive reviews, and I remember I was a-ok with most of the criticisms some writers did have. I find that stuff interesting. One guy, though, opened his review by bitching about the length—I repeat the length—of our song titles, and how they made him “yearn for the simplicity of ‘Yeah’” His review made me yearn for his typewriter to fall off a cliff. Did he not hear all those moments in those songs with the long titles when were all literally yelling “Yeah” over and over again? To my delight, most other folks seemed to really understand what we were going for:

A child reading a poem, a throat clearing, a voice altering microphone treatment, all these things are slipped in without much explanation, but also without pretense. The whole record is beautifully odd, more than a little off even when it’s just one person with a guitar…so how could a few real world sounds make it any stranger? – Dusted

We embarked on the first tour knowing the Pitchfork review would come out while we were on the road. We had been told a great review would change the tour completely, a terrible review would tank it, and a middling review would add 10 people to each show and make us feel kinda nice. The latter type of review arrived as we drove to North Carolina. We were having a great time on that first tour, though I was having trouble connecting to any of the bands we were paired with on the bills. Finally, in Chicago, we played with another band also on their first tour, Titus Andronicus. Their super energetic live show in an abandoned church was just the kick in the pants I needed. I was enamored. HTH and Titus camped out that night; we stayed up all night drinking beers and I tried to figure out just exactly when Patrick Stickles was joking and when he was being serious (note: still trying). We'd both appear on each others second albums.

People made it clear to me that they enjoyed my lyrics but found them wildly abstract and sometimes hard to pin down. This was genuinely confusing to me. I felt like each song, at the very least, followed the insular logic of a dream. And we all dream. I remembered poet John Ashbery claiming that all of his poems were about “the experience of experience” and that seems more than enough context for anything you might read or listen to, right? I remember trying to end long runs of what might seem like non-sequitors with unifying, common phrases like “I'm so in love with you” or “everything will probably be alright” or “somebody please shake me awake.” It seemed to me that if I could initially place the listener somewhere unfamiliar, that when these common, universal phrases came around, they would resonate even more powerfully. People expect those kind of sentiments in songs; I thought it was my job to get them to a place where they no longer expected it. I have no idea if that worked or not.

There's three of us that have been in the band since the beginning: Brian, Joseph and myself. Along with David, Eric, and Matt, I really think we made a unique debut album in the little strange world we were building at the time. I listened to Collective Psychosis Begone for the first time in many years earlier this week, and I was proud of the eccentric mess we made. If you've ever listened to it, we'd like to thank you for meeting us there.

Collective Psychosis Begone was released on Misra Records on June 22, 2007.

We just posted a live performance of the entire album from 2008 on Bandcamp. 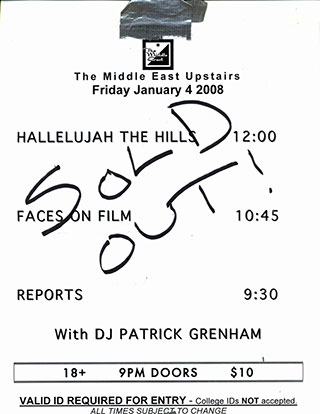